A 15 year-old cat presents with chronic cough and polypnea. There was no improvement after antibiotic treatment. 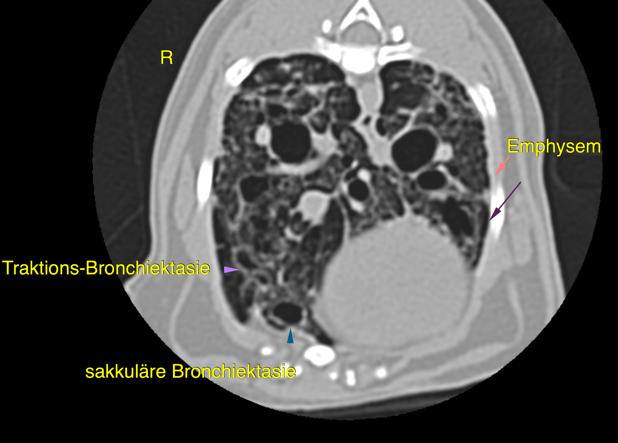 These findings support the presence of pulmonary fibrosis and can be secondary to chronic bronchitis, such as feline lower airway disease, idiopathic pulmonary fibrosis, as well as chronic infectious causes. The prognosis is poor owing to irreversibly decreased parenchymal compliance, reduced mucociliary clearance and presumably impaired gas exchange. Secondary superinfection is a common risk and to date no curative treatment option exists.

Traction bronchiectasis refers to pathologic dilatation of bronchi, caused by traction of surrounding parenchymal fibrosis. It is a subtype of bronchiectasis secondary to distortion of the lung parenchymal architecture. In this case it is characterized by severe structural pulmonary changes without evidence of a classic bronchial pattern.